Christopher aka Chris Bennetts Stalker Terrorist and 3 of his partners have written a "book" about a "treatment" against the internet stalkers, what to do and how to avoid them.

It's about a few pages in PDF format to download for the price of 29 Dollars, down from 89 they were asking initially.
The authors of the "book" appear to be Christopher Bennetts, Perry Gamsby, Guenther Vomberg who said he translated the book in German language (No where to be found on the net) but he's acting also as an affiliate paid a commission  from the sales generated from his (Guenther's) web sites.

But me, Evan Iliadis, I'm here today to tell my side of the story and save you some money. I'll tell you with no detour and run around, but straight to the point: That the "book" is a rip-off consisting to steal your first subscription slowly rip you off much more using a subtle setup scam to lure you in more expenses, like designing a good image (yours) building web site, "investigation" fees to track your "stalker" fees for reporting and removing negative things posted about you and much more.

I will now direct you to another site where you can read more details about the scam, so I will continue in bringing you some information about the main author of the book  Christopher aka Chris Bennetts Stalker Terrorist.

I'm here today to tell the world, that Christopher Bennetts is a terrorist, a dangerous stalker capable of everything to humiliate his victims, with some others of the same, participated in the stalking, humiliation, violence against a couple in Cebu, the girl happened to be his ex-companion and the mother of his child, the guy his best friend who happened to be chosen by his girlfriend as a better man that he (Bennetts) is.

Let's get started and let the court document tell the story.

Here is what she had to say for being a victim of this psychopath. I will put first a few excerpts of her affidavit she signed in her filing of charges against this predator, then I will post the entire text of the complaint. Click on the images below to enlarge them.


Republic of the Philippines
City of Lapu Lapu

COMPLAINT AFFIDAVIT
I ROBELYN BANDEJAS, of legal ageFilipinosingle with
Gun-ob, Lapu-Lapu city, Philippines, after being duly sworn to in
Accordance with law, hereby depose and state:

4. That the failure of Christopher Andrew Bennetts to provide the necessary financial support for my child had prompted me to seek the assistance of a lawyer who wrote to him a demand letter dated August 15. 2O08. A copy of the said demand letters attached hereto as Annex * B

On August 4. 2008 at around 6:30 in the evening, when Mr.
Bennetts went to my rented apartment al Oun-ob, Lapu LapuCity and barged into the same against my will, Mr Bennetts then smashed my appliances and berated me; this incident was duly reported to the police as evidenced by a copy of the police blotter attached hereto a Annex D. The pictures showing the damage caused by Mr Bennetts are also attached hereto as Annexes *E* and "E-1", respectively;


9 . on October 27, 2008 at around 11 o'clock in the evening, again Mr. Christopher Bennetts showed his propensity to cause humiliation and more emotional distress on my part by again following me and my fiancee. Dean Boyd Marston, at MBlsTavern in Haute Kafudoy Lapu Lapu City, this was done by Mr. Bennetts by hiring a person on board a motorcycle with plate number OV 8062 who went inside MB's Tavern to verify me and my fiancee's presence there and upon confirming our presence, the unknown person on board the said motorcycle informed Mr. Bennetts through text message of our presence and waited outside MB* Tavern, since we became auspicious because of the prior incident on August 4. 2006, and my fiancee together with the owner of MBS Tavern. Mrs. Effelberger, decided to leave the place on board Mrs Effelberger's Toyota Hi-Lux, however, before we could go away from the place, a red with plate number YDK 332 driven by a certain Paul, an American National, together with Christopher Bennetts and the former's girlfriend, came speeding down Kagudoy road and blocked the way of the Toyota Hi-Lux; Mr. Bennetts and company then went on harassing us by banging on the windows of the Toyota Hi-Lux and making intimidating and threatening gestures; to buttress my claim, MarleneEffelberger's affidavit is attached hereto as Annex "F";

10. Christopher Bennetts even went to the extent of yelling at us in the following words, to quote: "Be careful! I know where you fucking live". This was blatantly done by Mr. Christopher Bennetts in front of so many about 20 staff or personnel of , and as if not satisfied with what they have done, they further yelled defamatory remarks by charging and yelling that Mr. Marston victimized minor girls in Bogp City,
Cebu; the same incident was also reported to the police as reflected in two separate police blotters attached hereto as Annexes "G»" and *M*. .

Readers, I think you have already enough to judge if the author of "a book" on  is a stalker himself that physically stalking, humiliating, insulting and beating women.
I will continue the rest of the affidavit in the next entry, then a new page will be created for the original court documents. 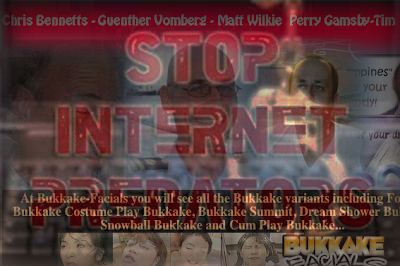 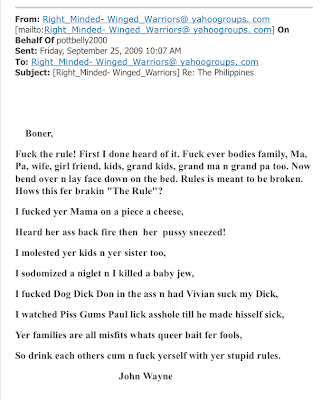 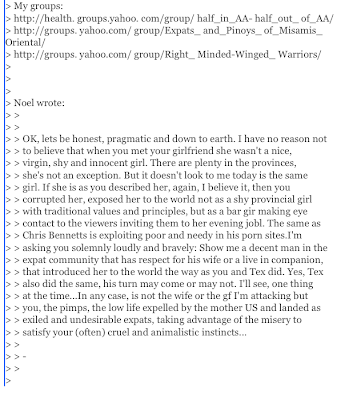